Forest floor interception is the part of the (net) precipitation that is temporarily stored in the top layer of the forest floor and successively evaporated within a few hours or days during and after the rainfall event. The forest floor can consist of bare soil, short vegetation (like grasses, mosses, creeping vegetation, etc.) or litter (i.e. leaves, twigs, or small branches).

In the literature little can be found on forest floor interception, although some researchers have tried to quantify the interception amounts. Generally these methods can be divided into two categories (Helvey and Patric, 1965):

An example of the first category is of Helvey (1964), who performed a drainage experiment on the forest floor after it was saturated. During drainage the samples were covered and after drainage had stopped (assumed 24 h), the samples were taken to the lab, where they were weighed and successively dried until a constant weight was reached. By knowing the oven dry weight of the litter per unit area and the drying curve, the evaporation from interception could be calculated. In this way they found that about 3% of the annual rainfall evaporated from the litter. But what they measured was not the flux, but the storage capacity. Another example of the first category was carried out by Putuhena and Cordery (1996). First, field measurements were carried out to determine the spatial variation of the different forest floor types. Second, the storage capacity of the different forest floor types were measured in the lab by using 10 a rainfall simulator. Finally, the lab experiments were extrapolated to the mapping step. In this way Putuhena and Cordery (1996) found average storage capacities of 2.8 mm for pine and 1.7 mm for eucalypt forest floors.

Examples of the second category are for example carried out by Pathak et al. (1985), who measured the weight of a sample tray before and after a rainfall event. They found litter interception values of 8%–12% of the net precipitation. But also here, they measured the storage capacity, rather than the flux. Schaap and Bouten (1997) measured the interception flux by the use of a lysimeter and found that 0.23 mmday-1 evaporated from a dense Douglas fir stand in early spring and summer. Examples of measurements with sheets were done for example by Li et al. (2000), who found that pebble mulch intercepts 17% of the gross precipitation. Miller et al. (1990) found comparable results (16–18%) for a mature coniferous plantation in Scotland.

Measuring forest floor interception
To measure evaporation from intercepted rainfall on the forest floor, a special device has been developed. The device consists of two aluminium basins, which are mounted above each other and are weighed accurately with 2 sets of 3 strain gauge sensors (see figure). One sensor consists of a metal ring where four strain gauges are mounted in the Wheatstone configuration. The upper basin is filled with forest floor and has a permeable bottom of geotextile, so water can percolate into the lower basin. In this lower basin a valve is installed, which empties every day for 10 min to avoid evaporation from the lower basin as much as possible. Also the space between the supporting structure and the aluminium basins is minimized, in order to avoid evaporation by turbulent wind fluxes. Besides the weight also the temperature is measured in one of the lower strain gauge casings. Every minute a measurement is carried out and saved on a data logger. 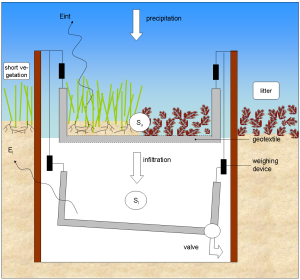 where Su and Sl are respectively the storage of the upper and the lower basin [L], which are obtained by dividing the weight of the basins [M] by the density of water [M L-3] and the surface area [L2] of the basin.

Papers on this topic: